The perspective of a committee member 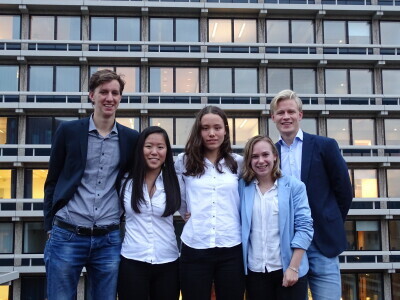 July first of 2019, I came across an interesting email. It came from our -at that time- brand new Internal Affairs Officer Sven Oldenburger with a simple question: Would you like to join a Kraket committee? After doing the first year's committee with great fun, I was positive about doing a new committee, but the question was which one. The SBF committee did not sound serious enough for me, but the Forum committee left little room for creativity. Then I saw two words which immediately convinced me for the committee: Diversity and development. Organizing a business event with an eye on the problems of society, sounded amazing to me. Econometrics is a technical study and I sometimes miss discussing the challenges in society that the 21th century brings, such as diversity. This committee was therefore the perfect opportunity for me to develop myself.

Diversity for a reason
While Econometrics is a study completely dominated by men, our committee was quite diverse. We had a majority of women, and there is no other committee within Kraket with such a difference in length between our tallest and our smallest member. The committee consisted of chairwoman Fleur Krijgsman, Denise van Dijk, Sun Wester, Bram Griffioen and me. As we knew from countless studies, diverse groups tend to perform better, so we knew we had to make the day worth it. As we started planning the day, it became clear that actively looking for diversity is not that easy. We wanted different types of companies for example, but it seemed as if only the same type of companies tended to be interested in the day. We knew we wanted speakers to talk about diversity, but it had to be other topics than last year, so women in the top of the company, and immigration were not possible anymore. Luckily we contacted Vivian Lodewijckx, the secretary of Kraket in 2009-2010. She works for Zenz Technologies now, a small company specialized in data science. What makes them interesting is their communication with other companies. Their clients often come from totally different cultures. They explained how they had to adjust their habits as typical Dutch people, and that they had to understand that people from for example Italy and South Korea have totally different work ethics. They explained that with the wrong mindset this could become a problem. However, with the right mindset this diversity of culture could enable them to improve upon their products. For the next speakers, we invited Achmea. They make headlines in the national news as they are one of the only big companies who take issues on diversity inside their company seriously, as they even have a diversity department. The speaker explained how we unconsciously try to look for ourselves in others. This has heavy consequences when it comes to solicitations in companies. She also explained that it is not only just to try to decrease discrimination in a company, but it is also smart. If you discriminate as a company, then there are simply less people to choose from.

Development for yourself
The next topic this day had to feature was development. While diversity takes many shapes and forms, development may as a topic be even more brought. Part of the job was simple, as this would be one of the first career days for most participants. This gave us lots of opportunities for workshops and other development opportunities, such as making a LinkedIn profile and making a LinkedIn picture. The workshop ‘Dress to impress’ about the clothes ethics was a surprise to a lot of students. Did you know that your belt has to fit your shoes? Do you know how thick your tie has to be? As the dress code was smart casual, the students were able to analyze each other as well. They are now able to go to their first solicitation the proper way. As the committee, we decided that we wanted to give the societal meaning of the word development some attention. That was when we came across the AIESEC workshop ‘Enjoy taking responsibility for a better world’.  Econometrics has a stigma that it is only about making as much money as possible, so this workshop seemed perfect to prove the world wrong. It was explained how it takes 21 days to chance a habit and students realized that ideals and actions often don’t match. The grand finale of the day was speed dating with companies. What could possibly be better for your development then finally talking to companies, often for the first time. The students were able to talk with all the companies for only five minutes. As this is rather short, we organized drinks afterwards. This is something students per definition don’t say no to, but some students were surprised that the recruiters liked to drink just as much as them.

Lastly, I would like to say that while this day may have been a great way for the students to develop, the committee was developing even more. The first time calling a company definitely was nerve wracking for some of us, while later on angrily emailing reminders to companies became part of a regular day. Some of us learned how to make a budget, others had to learn that it is important to check your mail regularly. Our first meetings were rather inefficient and mostly just for fun, but I guess that never really changed. Wouldn’t the world get boring if there is nothing to improve upon anymore?