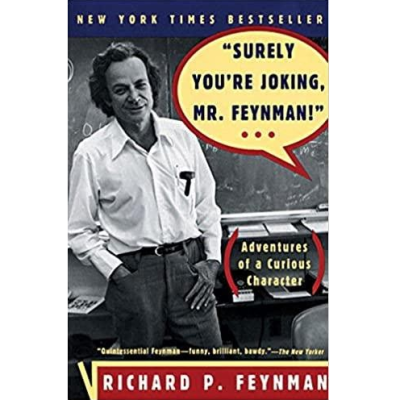 ‘Surely, you’re joking Mr. Feynman’ is an autobiographical book about the life of physicist and Nobel prize winner Richard Feynman. It follows his life starting from a young age, where he already liked to experiment with radio technology, all the way through his career as a renowned physicist including his work on the Manhattan project and advisory role on the national teaching curriculum. The book is filled with exciting and unusual anecdotes that are based on recorded audio conversations between Feynman and a close friend of his.

The book is filled with exciting and unusual anecdotes that are based on recorded audio conversations between Feynman and a close friend of his.

Richard Feynman, as portrayed in the book, was a well known scientist and, through his intellect, has achieved great things in the field of mathematics and physics alike. However, his accomplishments are not the main feature that have made the book an inspirational read to me. Instead, the book details the mindset underlying his approach to life, which is one I personally aspire to. This mindset consists of two main characteristics. Firstly, Feynman is described as a very inquisitive man taking an interest in a variety of topics including languages, samba music, art, safe-cracking, religion and more. Secondly, he was determined to fully dedicate and give as much energy as he can to the interests he has chosen. This combination has led him to, next to his scientific career, also be a professional bongo player who performed in international competitions, learn Portuguese due to an invitation to Brazil and be notoriously known for his safe cracking during his work on nuclear research for the US government.

The text is written in a very comical and accessible style, filled with jokes and interesting side thoughts.

The text is written in a very comical and accessible style, filled with jokes and interesting side thoughts. Occasionally it can be interpreted to be a bit on the arrogant side, but this seems unavoidable given his list of achievements. Surely, I cannot explain the mindset as well as Feynman has done himself in the book, so I recommend to read it for yourself!

Next week, MIcompany will take the spotlight with their cross-border project combining DNA research and AI!