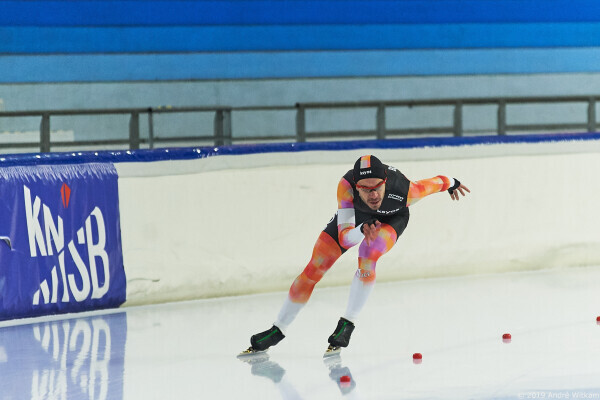 Hi, my name is Ruben Schel and I’m 21 years old. In addition to being an Econometrics and Operations Research student, I am also a speedskater at Team Ksyos. Every week, I train five to seven times. In the winter period, this means one or two bike rides (race- or mountain bike), three pieces of training on the ice, going to the gym once and often a contest. So this takes me a lot of free time next to studying. Not only the training itself costs a lot of time, but traveling to the ice rink is time-consuming as well.  My regular ice training is at the Jaap Eden Baan in Amsterdam, so going there after college is fairly easy. However, most contests are in Heerenveen, Leeuwarden, Enschede or even Groningen. These cities are all far from my hometown, Mijdrecht (lies at a small distance under Amsterdam).

At high school I was able to combine school and speedskating very well, due to the fact that I am an apt learner. Learning didn’t take a lot of time every week, so I was left with a lot of spare time which I could spend on speedskating. Nowadays, at the university, I need better time management to keep doing the things I love. Especially in the first (half) year of the study, when we all got advised to cancel most of our activities besides studying because of the hard first part of the study. Personally I did not agree with that, I still wanted to fully commit to speedskating. So I had to learn how to combine study and sports. Good weekly planning was the key to succeed in this. The college- and training times are always set, so that was the easy part of the schedule. The rest of the time was filled by studying at home, eating and sleeping.

Nowadays, I need better time management to keep doing the things I love.

Unfortunately for me, I got Pfeiffer's disease during the first year. This made things even harder than they already were. I missed a lot of lectures, so I had to become better at independent studying. This skill turned out to be very useful later on. I got cured of Pfeiffer's disease relatively quick, but I still got a backlog at the study. Fortunately, now my time management skills came in handy and I still managed to get my BSA. The only downside is that I got a study delay of a year, but I was satisfied with that because I managed to pass the first year.

Right now, it’s my third year as an Econometrics and Operations Research student. I’m still able to combine studying and speedskating very well. The skills I learned in the first year are still very useful as of right now. Good time management is of great importance and studying on my own as well. Over the last years, it was often the case that a lecture and training were scheduled at the same time. So I had to skip the lecture to practice sports. This worked out because of the skills that I learnt to study on my own. Over the past three years, I discovered that study and sports can support each other. Meaning that if I performed well at my study, I performed better on the ice. Same for the other way around, so they both get me motivated to perform well.

Now I can imagine that it doesn’t sound fun at all to combine so much sport with studying. And to be honest, the first half-year was pretty hard. A weekly schedule only consisting of following lectures, studying, sports, eating and sleeping was intense. But I was able to do it. I like to push my boundaries and it feels like an achievement when it all works out in the end. That’s the reason why I like speedskating. Although I skate fairly well, I know I will never become the next Sven Kramer. But still I want to push myself and I want to get everything out of it. For me, speedskating is a big part of my social life. The social aspect, the possibility of pushing my boundaries and of course the amazing feeling of speedskating itself makes it great fun for me.

It needs to be said that after the first half-year, the study gets a little bit easier. Easier in the way that you get a bit more spare time. This was evident in combining studying and sports. This created more time for me to do other things besides these two. As well as more time to invest in sports. Because of this, I was able to go to a training camp to Inzell in early October for a week this year. I missed out a week of lectures but still managed to get good grades at the tests later that same month. So I have proven to myself that I’m capable of creating a lot of time besides studying, which I can invest in speedskating. By this, I’m able to do all the things I love. To conclude, I would recommend everyone to keep doing the things they love. Because if you work hard enough, you should always be able to combine all these things with studying.

Next Monday 16 December, Minh will tell you all about her week. Stay tuned for more articles!